An 8-year veteran of the Air Force, Brad traveled the globe on assignment with the 48th Intelligence Squadron, working in places like Italy, South Korea, Saudi Arabia, and others. After two successful tours, Brad was Honorably Discharged to pursue his education.

With over 15 years working as a software developer, Brad has played a major role in creating software solutions for clients such as Walmart, Ford, SAP, and Carlson Hotels.

Brad was recently voted All Comedy Radio’s “Funniest Person in Kansas City” and The Pitch Weekly's "People Choice Best Local Comedian".   He was also a first place winner of the Today Show's "Quest for the Best Comedian in America", where he made his national TV debut.  He has also written material for many touring comedians. 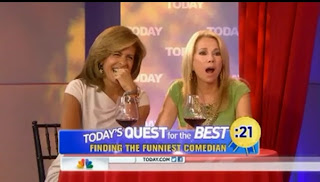 As an actor, Brad provides comedic relief in spots for Kia, Hyundai and numerous local businesses. He recently received two Emmy nominations for writing.  He can also be seen in the Emmy Award-winning comedy horror short, "Get Off My Porch."

Here are some things I love or hate (or just useless facts about me):