Last night comedian Andrea Caspari and I went to the club to check out Darren Carter (the Party Starter) who is performing this week at Stanford's. I ended up doing a guest spot in the second show and absolutely TORE it up! I had a great set. The crowd was fantastic. That club has some of the best rowdy crowds, which I call "The Johnny Dare" crowd; that is, loyal fans of "The Johnny Dare Morning Show". They are there to 'let loose' and laugh. 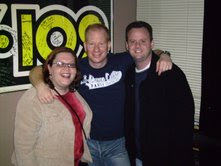 Darren is great at really pumping up the crowd. He comes out to his own theme song written by Kansas City rapper "Big Fluff Nickolantern." It takes him less than two seconds to get an entire room on his side and really involves the crowd throughout entire the show - something I haven't seen to that extent.

During his closer, "Big Fluff" was in the crowd and came up on stage to perform the Darren Carter song. It was the perfect closer to an already energetic set. 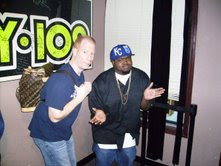 Side note: "Big Fluff" said he was just a Darren Carter fan and contacted Darren through MySpace to ask if he could write him a song. Now his song is heard in every city Darren where performs. After the show, "Big Fluff" handed out CDs of his songs to people in the crowd. That kid has a drive and knack for self-promotion that will make him famous. No question.

At one point during Darren's set, some lady said she wanted "Brad's Big White Caulk" - a reference to one of my jokes. Who's popular?