Thursday my good friend and fellow comedian Kurt Ramos passed away in Colorado. My heart goes out to his wife Susan and his boys.

I was there there very first time Kurt did comedy. Will C and I had a show and Kurt and Susan came to watch. He introduced himself after the show and said it was his dream to be a comedian. After a few minutes of talking, Will and I handed him the microphone and forced him to do comedy. He was a natural. His comedy was personal, honest, with a great point of view.

This is a picture of Kurt that night - his very first time on stage. What an honor to have witnessed that. 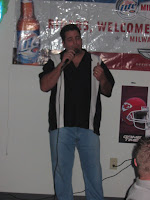 Our friendship grew, and we did many shows together. I will miss talking to him on the phone, running new joke ideas by each other, or talking about life.

My phone rang the other night while I was working. The caller id said it was Kurt. I figured I would just call him back when I was done. I wish I knew it would be the last time I would hear his laugh. I keep staring at my phone, wishing I could go back and answer it.